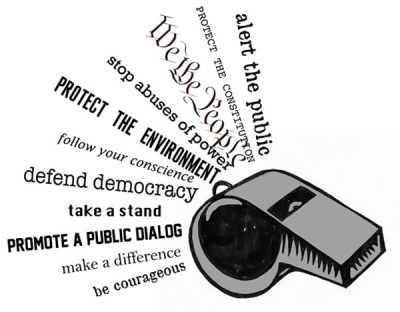 The resolution, introduced by Senator Chuck Grassley (R-IA) and cosponsored by all 14 members of the Senate Whistleblower Protection Caucus (seven Democrats and seven Republicans), passed the Senate by Unanimous Consent.  The resolution sets forth the United States’ long history of supporting whistleblowers, including in the time before the Bill of Rights and the first whistleblower law passed in 1778.

Senator Grassley, who is also chairman of the Senate Whistleblower Protection Caucus, has said of the passage of Resolution:

Workers who come forward to report fraud or misconduct in their agencies are frequently punished by their superiors for simply telling the truth.  These brave citizens should not be penalized, they should be praised. They save taxpayers billions of dollars each year, and they help to bring about a government more accountable to the people.  Long ago, our founders recognized that government needs honest and proactive employees to help ensure that it functions properly and efficiently.  Our resolution reaffirms this idea and celebrates whistleblowers for their contributions to transparent and accountable government.

Congress has an obligation to stand up for individuals who risk their jobs and reputations to shine a light on threats to public safety and wasted taxpayer dollars.  Whistleblowers in far too many parts of the government continue to face retaliation for speaking out.  The Whistleblower Caucus is committed to fighting for fair treatment for these brave individuals and we are asking our colleagues to join us in supporting this resolution.

The text of Resolution 522 “encourage[s] each executive agency to recognize National Whistleblower Appreciation Day by– informing employees, contractors working on behalf of United States taxpayers, and members of the public about the legal rights of citizens of the United States to ‘blow the whistle’ by honest and good faith reporting of misconduct, fraud, misdemeanors, or other crimes to the appropriate authorities; and acknowledging the contributions of whistleblowers to combating waste, fraud, abuse, and violations of laws and regulation ”

As the Resolution notes, the designation of July 30th is to commemorate the first whistleblower law passed in America by the Continental Congress in 1778.  The 1778 legislation stated that:

[I]t is the duty of all persons in the service of the United States, as well as all other inhabitants thereof, to give the earliest information to Congress or other proper authority of any misconduct, fraud or misdemeanors committed by any officers or persons of these states, which may come to their knowledge.

The Resolution also sets forth that whistleblower activities have been occurring in America since before the passage of the Bill of Rights (“10 sailors and marines blew the whistle on fraud and misconduct harmful to the United States”), and that “the Founding Fathers unanimously supported the whistleblowers in words and deeds, including by releasing government records and providing monetary assistance for reasonable legal expenses necessary to prevent retaliation against the whistleblowers.”

According to Mr. Kohn:

National Whistleblower Appreciation Day commemorates America’s first whistleblower law.  At the height of the Revolution, our Founding Fathers recognized the importance of whistleblowers in a democratic society.  Senators Grassley has played a key role in bringing together a truly bi-partisan group of Senators to stand behind whistleblowers and celebrate their history and contributions.  We hope that the Senate Whistleblower Caucus will play a vital role in defending the False Claims Act and similar, highly effective whistleblower laws, and working toward a day when whistleblowers are thanked for their courage, not fired, blacklisted or worse.