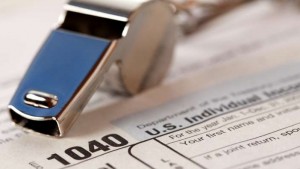 The IRS Tax Whistleblower Program was established by the Tax and Health Care Act of 2006, and processes several thousand whistleblower claims each year.  Tax Whistleblower Program claims over the years have allowed the IRS to collect approximately $2 billion in additional tax revenue since 2011 and to further chip away at the $450 billion tax gap, which represents the difference between taxes owed and taxes collected.

Vulnerability to Retaliation Keeps Many Whistleblowers from Reporting to IRS

In order to encourage tax whistleblowers, the IRS mandates that whistleblowers receive at least 15 percent of the proceeds collected as a result of their reporting.  Even still, for some potential whistleblowers their vulnerability to retaliation from his or her employer is too much, outweighing any incentive to come forward.  In fact, there is no federal law that allows tax whistleblowers to seek relief after being retaliated against for reporting underpayments to the IRS.  In light of the lack of federal law, the GAO recommends that Congress put in place retaliation protections, akin to those already in place under the False Claims Act and the Dodd-Frank Act.

Tax Whistleblower Program claims currently take nearly five to seven years to process, with the initial review of those claims divided into three parts: 1) administrative processing; 2) preliminary merits review; and 3) in-depth review by subject-matter experts.  There is no time limit for any of the three steps outlined above.  Furthermore, if one of the subject-matter experts decides that the case merits a full review, then the IRS will often initiate an examination of the alleged underpaying taxpayer.  The alleged underpaying taxpayer can then appeal the examination through the IRS Office of Appeals, which can take between 90 days and one year to complete.  The taxpayer can also appeal the examination through the Tax Court, but that is an even longer process.

It is only after any appeals are complete and all proceeds are collected that whistleblowers may collect their awards from the Tax Whistleblower Program.  Award determination and payment may take up to six additional months.  As a result, the GAO has recommended that the Tax Whistleblower Program consolidate its initial review and award determination into one process, as well setting deadlines for each step of the process.  The GAO says consolidation will lead to a more expedited process and will ensure that meritless claim do not waste time in the lengthy review process.

Lack of communication with IRS Problematic for Whistleblowers

While the IRS cannot disclose tax information, the GAO says it can better describe for the public what constitutes a valid whistleblower claim.  For example, the agency argues that the IRS should take advantage of its existing regulatory authority to enter into a contract with an individual to share information for the purposes of advancing tax administration. Contracts would not only open up a line of communication, but would also provide the IRS with “free help” in analyzing complex tax issues.  The GAO further contends that the Whistleblower Office should include in its annual report to Congress basic data on processing times and reasons why claims were rejected.  Inclusion of this information would provide Congress with a better yearly “snapshot” of the whistleblower program and would allow for more improvements.

Even though the GAO listed a number of concerns with the IRS Tax Whistleblower Program, Stephen M. Kohn, Executive Director of the National Whistleblowers Center, stated, “the program is staring to work.”  According to Kohn, the IRS Program, at its 10-year mark, is performing at higher level than the Department of Justice’s False Claims Act program did over a comparable length of time.

“Despite all of the growing pains and delays the IRS program is actually ahead of the comparable program run by the Department of Justice for the False Claims Act cases.  The most objective performance indicator for whistleblower reward programs is how much is actually paid to whistleblowers.  The IRS is way ahead as the DOJ.  It its 10-year mark the IRS paid whistleblowers $103 million.  At the FCA’s ten-year mark, DOJ paid whistleblowers a mere $25.8 million.  Furthermore, despite DOJ’s 30-year history administering the FCA, the IRS has already given an individual whistleblower the highest award in history,” Kohn noted.

IRS Highlights Tax WHistleblower Program in Own Report to Congress

“This report shows that the IRS Whistleblower Office is focused on doing a better job of processing whistleblower submissions and making awards in a more timely manner  – all good news for whistleblowers,” said Dean A. Zerbe, Senior Policy Analyst for the National Whistleblowers Center.

After reviewing the IRS report to Congress, Zerbe concluded, “It is clear from the new report and from what we’ve seen through our extensive work with the IRS whistleblower office that whistleblowers who have the best chance of having their claim considered are those submissions that meet 5 criteria: 1) the claim involves significant tax dollars; 2) the tax issue involves open tax years/current issues – within last 6 years; 3) the whistleblower is naming specific taxpayers; 4) the whistleblower has detailed information/documents about the tax issue; and, 5) the whistleblower is credible and knowledgeable.  Bonus points if the taxpayer is doing something particularly egregious and/or it is an issue that the IRS has never seen of before.   The IRS isn’t expecting a whistleblower to have perfect information (although that would be nice) but the more meat on the bone the better.”