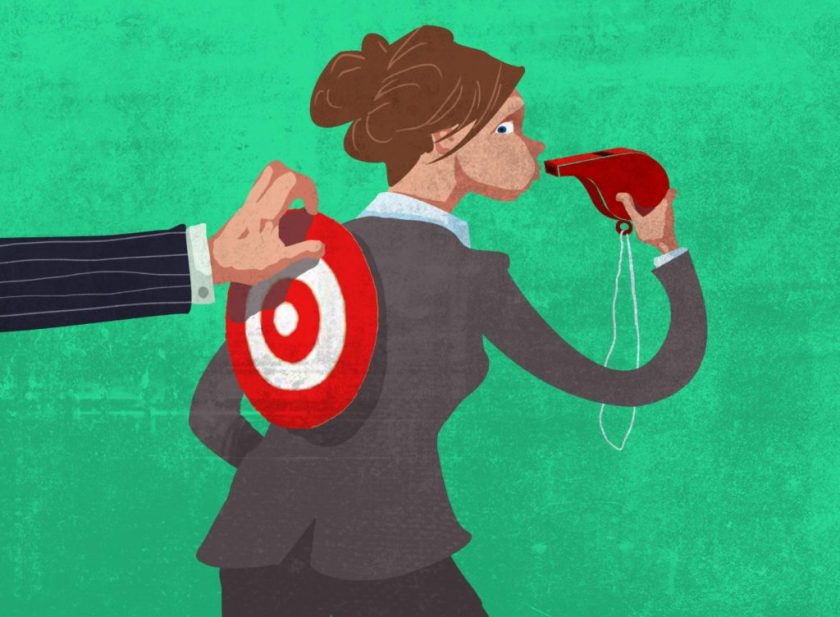 The Securities and Exchange Commission (“SEC”) has recently reiterated its stance against problematic pretaliation severance agreements that attempt to require outgoing employees to waive their rights to recover a whistleblower bounty or to bring a qui tam action against his or her soon-to-be former employer.  Over the past two weeks, the SEC has announced two separate settlements with companies accused of utilizing severance agreements that targeted whistleblowers in violation of whistleblower protection rules.  As a result of these settlements, the companies have agreed to pay fines of approximately $265,000 and $340,000, respectively.

On August 10, the SEC announced that Atlanta-based building products distributor, BlueLinx Holdings Inc., had agreed to settle charges “that it violated securities laws by using severance agreements that required outgoing employees to waive their rights to monetary recovery should they file a charge or complaint with the SEC or other federal agencies.”

According to the SEC’s order, from approximately August 2011 until the present, BlueLinx entered into severance agreements with certain employees who were leaving the company.  As part of the agreements, BlueLinx “prohibited the employee from sharing with anyone confidential information concerning BlueLinx that the employee had learned while employed by the company, unless compelled to do so by law or legal process.”  The severance agreements also “required employees either to provide written notice to the company or to obtain written consent from the company’s legal department prior to providing confidential information pursuant to such legal process.”  However, none of the severance agreements “contained an exemption permitting an employee to provide information voluntarily to the Commission or other regulatory or law enforcement agencies,” the SEC said.

In about June 2013, some two years after the SEC adopted Rule 21F-17 (“Staff communications with whistleblowers”), the SEC says BlueLinx made a number of revisions to its severance agreements “that a departing employee was required to accept as a condition for receiving monetary severance payments and other consideration from BlueLinx.”  For example, BlueLinx added the following clause to its Letter Agreement:

[The Employee shall not] disclose to any person or entity not expressly authorized by the Company any Confidential Information or Trade Secrets….Anything herein to the contrary notwithstanding, you shall not be restricted from disclosing or using Confidential Information or Trade Secrets that are required to be disclosed by law, court or other legal process; provided, however, that in the event disclosure is required by law, you shall provide the Company’s Legal Department with prompt written notice of such requirement in time to permit the Company to seek an appropriate protective order or other similar protection prior to any such disclosure by you.

In addition to adding the above confidentiality clause, BlueLinx added the following general release provision to all of its severance agreements:

Employee further acknowledges and agrees that nothing in this Agreement prevents Employee from filing a charge with…the Equal Employment Opportunity Commission, the National Labor Relations Board, the Occupational Safety and Health Administration, the Securities and Exchange Commission or any other administrative agency if applicable law requires that Employee be permitted to do so; however, Employee understands and agrees that Employee is waiving the right to any monetary recovery in connection with any such complaint or charge that Employee may file with an administrative agency.

The SEC says that some 160 BlueLinx employees entered into severance agreements with the company that contained the two provisions set forth above.

According to the SEC:

By including those clauses in its Severance Agreements, BlueLinx raised impediments to participation by its employees in the SEC’s whistleblower program. By requiring departing employees to notify the company’s Legal Department prior to disclosing any financial or business information to any third parties without expressly exempting the Commission from the scope of this restriction, BlueLinx forced those employees to choose between identifying themselves to the company as whistleblowers or potentially losing their severance pay and benefits.

Further, by requiring its departing employees to forgo any monetary recovery in connection with providing information to the Commission, BlueLinx removed the critically important financial incentives that are intended to encourage persons to communicate directly with the Commission staff about possible securities law violations.

As a result of the settlement with the SEC, BlueLinx has agreed to pay a $265,000 fine.  BlueLinx has also agreed to include the following provision in all of its future severance agreements:

Protected Rights. Employee understands that nothing contained in this Agreement limits Employee’s ability to file a charge or complaint with the Equal Employment Opportunity Commission, the National Labor Relations Board, the Occupational Safety and Health Administration, the Securities and Exchange Commission or any other federal, state or local governmental agency or commission (“Government Agencies”). Employee further understands that this Agreement does not limit Employee’s ability to communicate with any Government Agencies or otherwise participate in any investigation or proceeding that may be conducted by any Government Agency, including providing documents or other information, without notice to the Company. This Agreement does not limit Employee’s right to receive an award for information provided to any Government Agencies.

Furthermore, BlueLinx has agreed to contact all former BlueLinx employees who signed the aforementioned severance agreements, and “provide them with an Internet link to the Order5 and a statement that BlueLinx does not prohibit former employees from: (1) providing information to, or communicating with, Commission staff without notice to the Company; or (2) accepting a whistleblower award from the Commission pursuant to Section 21F of the Exchange Act.”

SEC Says It’s “Continuing to Stand Up for Whistleblowers”

In the SEC’s press release, Stephanie Avakian, Deputy Director of the SEC’s Enforcement Division said, “We’re continuing to stand up for whistleblowers and clear away impediments that may chill them from coming forward with information about potential securities law violations.”  Jane Norberg, Acting Chief of the SEC’s Office of the Whistleblower, added, “Companies simply cannot undercut a key tenet of our whistleblower program by requiring employees to forego potential whistleblower awards in order to receive their severance payments.”

In the second case, on August 16, the SEC announced that California-based Health Net Inc. “agreed to pay a $340,000 penalty for illegally using severance agreements requiring outgoing employees to waive their ability to obtain monetary awards from the SEC’s whistleblower program.”  In its press release, the SEC said that Health Net “violated federal securities laws by taking away from departing employees who wanted to receive severance payments and other post-employment benefits the ability to file applications for SEC whistleblower awards.”

The SEC says in its order that, from August 2011 until October 2015, Health Net, similar to BlueLinx, entered into a number of severance agreements with employees that were leaving the company.  The SEC says that these severance agreements contained certain provisions that violated securities laws.  In August 2011, Health Net amended its “Waiver and Release of Claims” provision “to specify that, while not prohibited by the severance agreement from participating in a government investigation, the former employee who executed the Waiver and Release of Claims was prohibited from filing an application for, or accepting, a whistleblower award from the Commission.”  Specifically, Paragraph 4 of the Waiver and Release of Claims provision required an employee to waive: “the right to file an application for award for original information submitted pursuant to Section 21F of the Securities Exchange Act of 1934.”

Similarly, while Paragraph 8 of the Waiver and Release of Claims provision did not prohibit an employee from participating in any investigation initiated by a federal agency, Paragraph 8 “required the employee to waive his or her right to any monetary recovery related to any such investigation.”  Specifically, Paragraph 8 provided:

[N]othing in this Release precludes Employee from participating in any investigation or proceeding before any federal or state agency, or governmental body . . . however, while Employee may file a charge and participate in any such proceeding, by signing this Release, Employee waives any right to bring a lawsuit against the Company, and waives any right to any individual monetary recovery in any such proceeding or lawsuit or in any proceeding brought based on any communication by Employee to any federal, state, or local government agency or department.

The SEC alleged that approximately 600 Health Net employees signed severance agreements with the above provisions in the, between August 2011 and June 2013.

In June 2013, Health Net made changes to its severance agreements, and while the changes removed the language prohibiting employees from applying for whistleblower awards, the amended agreements “retained restrictions in the Waiver and Release of Claims that removed the financial incentive for its former employees who executed that agreement to communicate with Commission staff concerning possible securities law violations at Health Net.  Paragraph 5 of the revised Waiver and Release of Claims stated that:

[N]othing in this Release precludes Employee from participating in any investigation or proceeding before any federal or state agency or governmental body . . .however, while Employee may file a charge, provide information, or participate in any investigation or proceeding, by signing this Release, Employee, to the maximum extent permitted by law . . . waives any right to any individual monetary recovery . . . in any proceeding brought based on any communication by Employee to any federal, state or local government agency or department.

In addition to agreeing to pay a hefty fine, Health Net has agreed to similar terms to those agreed to by BlueLinx, including contacting former employees that signed the severance agreements.

The SEC’s settlements with BlueLinx and Health Net come more than one year after the SEC penalized KBR, Inc. for an anti-whistleblower provision in the confidentiality agreements that KBR required its employees to sign when participating in the company’s internal investigations.  KBR paid a $130,000 fine for the provision and, like BlueLinx and Health Net, agreed to amend its confidentiality agreement to make clear that employees will not be subject to retaliation for reporting potential violations to the SEC, and they do not need to seek approval before doing so.